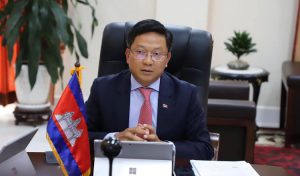 Cambodia is preparing the draft of the Phnom Penh Statement on the Post-Covid-19 Socio-Economic Recovery for adoption by the leaders of the Asia and Europe during the 13th ASEM Summit hosted by Cambodia in November, Foreign Affairs Ministry Secretary of State Luy David said.

“The draft of Phnom Penh Statement on the Post-Covid-19 Socio-Economic Recovery initiated by Cambodia will be adopted by the ASEM leaders during the 13th ASEM Summit”, he said on Friday.

“This is a testament to Cambodia’s diplomatic talent and capability as well as an actual factor that Asia-Europe partners have supported the government of Cambodia in promoting multilateral mechanisms, economic cooperation, connectivity and resolving common issues between the two regions,” he added.

David said that under the chairmanship of Cambodia, all Asia-Europe countries have a closer and more cohesive cooperation, especially in the context of the deadly Covid-19 pandemic which all countries around the world are fighting.

David who is also the head of the ASEM 13 National Secretariat, said that previously, Cambodia had committed to host the summit in physical form, but the safety of leaders of ASEM countries as well as all Cambodians during the Covid-19 pandemic is a main priority.

As a new strain of the virus is spreading around the world, Cambodia has decided to host this summit virtually, by video-conference. The Kingdom will still chair the ASEM 13 summit and Prime Minister Hun Sen will open it on November 25, he said.

ASEM is an intergovernmental process established in 1996 to foster dialogue and cooperation between Asia and Europe.

Progress Meeting of the AEEBF1, presided over by Minister PAN Sorasak